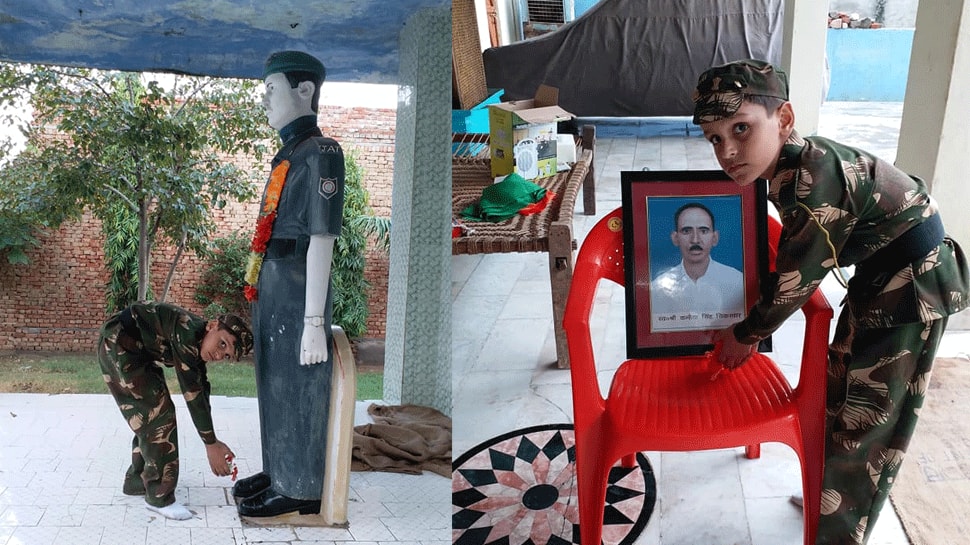 NEW DELHI: While the holy town of Ayodhya is being decked up and preparations are in full swing ahead of the Ram Temple Bhoomi Pujan on August 5, the ancient city has a unique visitor these days. His name is Dev Parashar. After watching the popular Zee News show DNA, which is hosted by the channel’s Editor-in-Chief Sudhir Choudhary, this ten-year-old embarked on a noble mission to visit the homes of martyrs, who made supreme sacrifice for the sake of the motherland.

Dev Parashar’s goal is to visit the homes of at least 11,000 martyrs, meet their families and collect soil from their homes. After visiting a martyr’s house, Dev Parashar, who has now become popular as ‘Little Soldier’, places a tricolour on the rooftop of the house.

Dev Parashar’s family says their boy got this inspiration after watching an episode of the extremely popular Zee News show DNA aired on July 2, 2018. During the show, its host Sudhir Chaudhary had appealed to the countrymen to express solidarity with the families of the martyrs, help them and show them that the whole country stands with them.

So far, this ‘Little Soldier’ has visited the homes of 1600 martyrs across the country. Besides paying a visit to the martyr’s home and placing a tricolour, he also cleans various memorials built in the honour of these brave sons of ‘Mother India.’

Prakash Sharma, a close associate of Trust secretary-general Champat Rai, said that this soil will be used during ‘Bhoomi Poojan’ as a mark of respect to the martyrs who made supreme sacrifices in keeping the sovereignty of the nation.

It may be noted that Prime Minister Narendra Modi and some selected dignitaries will attend the ground-breaking ceremony in Ayodhya on August 5. The construction of the Ram temple will formally begin after the Bhoomi Pujan ceremony during which the PM will lay the foundation stone of the temple.

Grand preparations for Ram Temple ‘Bhoomi Pujan’ are underway across Uttar Pradesh. On August 4-5, prayers will be held in Mathura, Kashi, Chitrakoot, Prayagraj, Gorakhpur and Naimisharanya and texts of Akhand Ramayana will be recited.